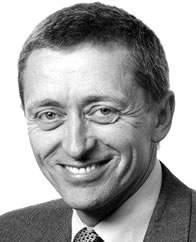 Murray Easton is a mechanical engineer by profession and a consummate leader by passion. His most recent assignment was as Executive Director of Murray & Roberts, overseeing the fabrication of two large coal fired power station structures in South Africa. He is especially skilled in building tight teams from diverse cultural groups who need to be consistently productive in complex environments.

Previous to this he was Managing Director of BAE Systems Submarine Solutions where he was responsible for bringing the Astute Class nuclear powered hunter killer submarines into affordability.

He has also held roles as Operations Director and Assistant Ship Manager at Yarrow Shipbuilders Ltd, Glasgow, and as Production Director of Cammell Laird Shipbuilders at Birkenhead, on the Mersey.

Murray Easton was awarded an Honorary Doctorate in 2006 and a CBE in the 2008 Queen’s New Year’s Honours, for services to industry. He has a proven track record of delivering complex capability in an environment of cutbacks and uncertainty.