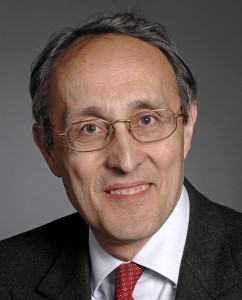 On 5 March 2015, the ITER Council appointed Bernard Bigot, from France, Director-General of the ITER Organization.

Bernard Bigot has been closely associated with ITER since France’s bid to host the project in 2003. Following the ITER site decision in 2005, the signature of the ITER Agreement in 2006 and its ratification by all Members in 2007, Mr Bigot was delegated by the French government to act as High Representative for the implementation of ITER in France, a position that he has occupied since 2008.

With the responsibility of coordinating the realization of ITER and ensuring the representation of France to the ITER Members and the ITER Organization, he has followed the project for some twenty years.

In his long and distinguished career, Bernard Bigot has held senior positions in research, higher education and government. Prior to his appointment at ITER he completed two terms (2009-2012 and 2012-2015) as Chairman and CEO of the French Alternative Energies and Atomic Energy Commission, CEA. This government-funded technological research organization – with ten research centres in France, a workforce of 16,000 and an annual budget of EUR 4.3 billion – is active in low-carbon energies, defense and security, information technologies and health technologies.

From 2003 to 2009 Bernard Bigot served as France’s High commissioner for atomic energy, an independent scientific authority whose mission is to advise the French President and the French government on nuclear and renewable energy policy and in all the other scientific and technological domains where the CEA intervenes.

On his long experience in the field of energy, he says: “I’ve always been concerned with energy issues. Energy is the key to mankind’s social and economic development. Today, 80 percent of the energy consumed in the world comes from fossil fuels and we all know that this resource will not last forever. With fusion energy we have a potential resource for millions of years. Harnessing it is an opportunity we cannot miss.”

In parallel to these academic responsibilities, he worked at the ministerial level as Head of the Scientific and Technical Mission (1993-1996), Director-General of Research and Technology (1996-1997), and Deputy Director for Research from 1998 to 2000.

Back to Conference Programme